How sensitive are our fingertips? 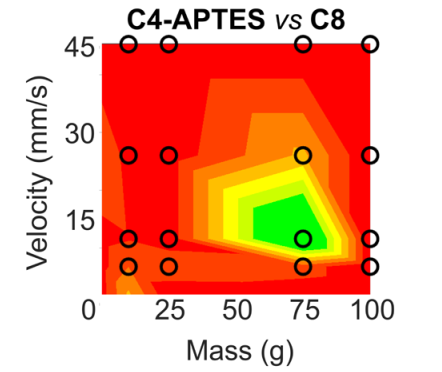 Last year, I came across a fascinating paper about human touch. It was from Asst. Prof. Charles Dhong's lab at the University of Delaware. I realised that he was on Twitter, so I contacted him to ask if he'd be willing to chat to me, because I felt it'd be a perfect addition to one of Sticky's chapters. He said yes, and our conversation ended up being a lot of fun. I was in the final throes of writing the book by then, so the paper only got a brief mention, but I'm so glad I could include it. I decided to write a long Twitter thread based on our interview too, as a way to share the research with a wider audience. If you like, you can read the whole thing there, but for *reasons* I decided to reproduce it on my website too. Enjoy!

A science thread to start the day. You might remember my tweeting about this paper a few weeks ago https://twitter.com/CharlesDhong/status/1387113671973867521?s=20… I was very excited because it touched (hehe) on two topics that I cover in #StickyBook – namely, the origins of friction, and the human sense of touch. 1/x

In very simple terms, our sense of touch is largely provided by sensors called mechanoreceptors that are buried at different depths within our skin. There are 4 main types, and each responds to different stimulations, e.g. sustained pressure or surface texture. 2/x

As we run our hand along a surface, interacting with features often much too small to see, these mechanoreceptors bend and flex at specific frequencies in response, causing our nerve endings to fire, and sending distinct electrical signals to our brain. 3/x

This is why we often think of friction / the ‘feel’ of objects as a physical phenomenon - our fingertip ridges interacting with tiny bumps on that object’s surface. But this study, from @CharlesDhong’s lab @udelaware instead altered tactile perception using *chemistry* 4/x

That friction is partly chemical is not a new idea; atomic force microscopes (AFM) have been used to measure frictional forces between small numbers of atoms – the role of chemistry is clear (see #StickyBook Ch 9). Of course, the AFM is a precision instrument. 5/x

The human finger is big, squishy and imperfect. But it turns out that its suite of mechanoreceptors grants it with superpowers – it can unpick some of the fundamentals of friction. And this paper demonstrates that beautifully. 6/x

To paraphrase study co-author @laure_kayser, what they showed was that very subtle changes in surface chemistry can provide a tactile contrast on otherwise ‘smooth’ surfaces. 7/x

In other words: the human sense of touch is so finely-tuned that it can distinguish between coatings that look identical and have very similar, low roughness, but which have minor chemical differences – via substituting single atoms or changing the length of the molecule. 8/x

After reading the paper (the @arxiv link to it is https://arxiv.org/abs/2010.02127) I asked @CharlesDhong if he’d be up for a Zoom call. He kindly obliged, and we spent a good 30 mins nerding out about friction. Thanks Charles! 9/x

Their study started by coating silicon wafers with a series of silane-derived compounds (carbon, silicon & hydrogen, arranged into chains of varying lengths). Charles said “We chose silanes because they’re thin, easy to make and chemically it’s easy to track what's going on.” 10/x

The silicon wafers themselves also have a very low surface roughness - less than 1 nanometre. That’s far below the human limits of tactile perception, which means that a finger dragged along these surfaces will find them all to be incredibly smooth 11/x

The samples all looked very similar too, no obvious visual differences between them. But before involving human participants in the study, Charles and his colleagues wanted to see if they could predict how easily these samples could be differentiated 12/x

So, they cast a small slab of PDMS around a 3D-printed bone, and chemically treated it to produce something with similar mechanical properties to a real index finger. They slid this mock finger along the surfaces at known velocities & pressures, and measured the friction 13/x

Charles said “This systematic testing produced a heat map for pairs of samples. That allowed us to form a hypothesis saying, under average human exploration conditions, which two surfaces might feel different and which might feel the same?” 14/x

A lot of touch-related research restricts how a participant moves their finger, which can lead to a controllable but ultimately, artificial measurement environment. The mock finger experiments gave Charles’ group the range of what people, in general, would do 16/x

That allowed them to be a bit more 'free' in the later stages of the project. So with this information gathered for all of their surfaces, @CharlesDhong and his colleagues could start working with their 14 human participants. 17/x

Each participant was presented with three surfaces: two coated with the same silane, and one coated with different silane. Participants could freely explore the surfaces with their fingers - at any speed, direction, pressure, etc. They were asked to identify the odd-one-out. 18/x

And participants “successfully discriminated between three pairs of surfaces”. When surface coatings differed by chain length OR by atomic substitution, the accuracy was <68% (see paper). But when both were changed, humans could discriminate between them with 82.3% accuracy 19/x

Charles said, “I was surprised that people could tell some samples apart almost every time. These are really very subtle differences. You could discriminate between them with an AFM, but your finger is huge. I didn’t really expect to see it translating across that scale.” 20/x

He attributes this to how the silane monolayers lie on the surface, “There’s a transition called ‘monolayer ordering’. You can do it two ways - make the chains longer to increase intermolecular forces, or put in a nitrogen group, which allows for hydrogen bonding…” 21/x

“…Either way, this allows the chains to get together and form more coherent, or solid-like, layers. If you have that transition, the friction can dramatically change.” And these results suggest that the human finger is sensitive enough to detect that molecular-level change 22/x

When asked to summarise their findings, @CharlesDhong said “With this work, we're saying that touch isn’t just about physical features. We can have a chemical or molecular control over touch, you know, even simply by a single atom substitution between surfaces…” 23/x

“…And though the effects are really subtle, they cascade through and change the microstructure, and people can actually pick up on this. The big takeaway is that, if you want to design surfaces for touch, you can maybe add coatings chemistry into the mix.” 24/x

The team are keen to extend this study beyond silanes, with Charles saying, “The results are exciting, and while it’s tempting just to pick some cool new materials, we want to be really systematic about it and do it properly.” So my advice is to watch this space! 25/x

While our conversation will make a very (very) brief appearance in #StickyBook, I thought it deserved a bit more attention – hence this thread. I hope you enjoyed it 26/26